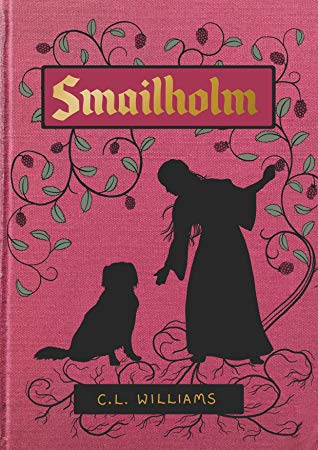 Shh! Can you keep a secret?

In wild medieval Britain thirteen-year-old Wynn Hoppringle has a big secret of the smallest kind. She has discovered a miniature village hidden close to her family home of Smailholm Tower. When tales of merciless Border raiders reach the small folk, they realise they are in danger and must seek a cure to their strange predicament. Can Wynn help her tiny friends or will the scheming King quog have other ideas? Heroes, it seems, come in all sizes.

Smailholm was an engaging middle-grade fantasy that was easy to read and fun to enjoy. It is a historical fantasy with olde-worlde language in small parts. I enjoyed the setting of Scotland, the differences between the haves and the have-nots and of course the Lilliput/Borrowers context of little people in a little land.

There were two protagonists in this story, a 13-year old girl called Wynn who was noblewomen-to-be living in Smailholm Tower and then short chapter interludes from Deablin. Who or what Deablin is, is revealed during the story but it was a clever connection, even though her short interjections were sometimes a little confusing. That said, the confusion was part of the story and it did build up to answers eventually.

Wynn had found the little village, hidden under the brambles, where she was a giant and they were very small. Wynn had been getting to know these folks for a few years and they had become trusted friends. At the fore of the village people were Jimmy and Jenny. Vargo, Wynn’s dog was also a key character and a sweet addition to the story.

What starts off as an interesting story becomes one of adventure, fantastical beings and unsavoury creatures. It all made for a rather fast-paced story. There were moments of reading confusion with some of the fantasy elements but the world building came and caught me up on most questions. I found the eventual Deablin answers a bit confusing and some of the beings or spirits connected to that difficult to get into. The rest of the story kept me engaged, however.

The story finished rather openly and with some elements I want to know more about and some characters I need to know about. This was a solid debut from CL Williams and I would definitely read her work again.

I need to mention what a glorious physical creation this book is. It is a small hardback clothbound book with gorgeous illustrations that really helped with the visualisation of beings in this world. The book itself is beautiful to read and own and it stands out amongst other books.

Thank you to the author for a review copy in return for an honest review.