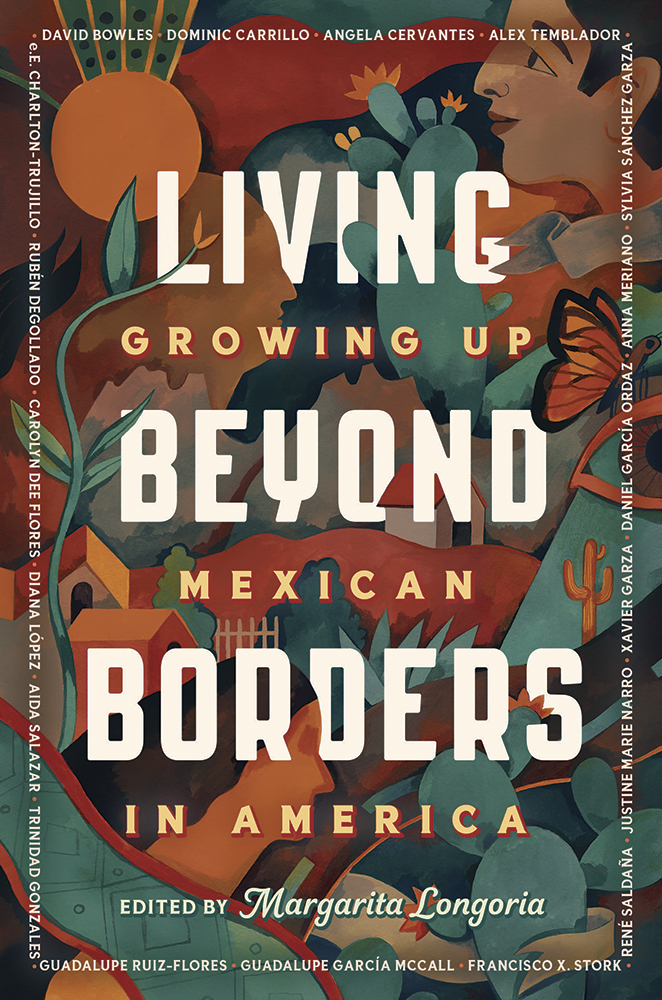 In this mixed-media collection of short stories, personal essays, poetry, and comics, this celebrated group of authors share the borders they have crossed, the struggles they have pushed through, and the two cultures they continue to navigate as Mexican American. Living Beyond Borders is at once an eye-opening, heart-wrenching, and hopeful love letter from the Mexican American community to today’s young readers.

Who made the rules on what being Mexican was or wasn’t? I’d always been told to check a box — to fit in one category or the other. But it wasn’t ever that easy. And why did it matter?

I wasn’t sure I was going to rate this, as I don’t tend to award stars to non-fiction (not that I read much of it, to be fair, despite my best intentions!), but as I think most of what is comprised of this anthology is fiction (though I could of course be wrong..), I felt it deserved to be rated. Particularly in the hopes that people see the stars and feel inspired to look a little closer at this and maybe, even, hopefully, pick it up.

Mom and Dad used to love taking me to all the Mexican and Chicanx pride events, and I used to like it too until I got older and couldn’t wrap my head around how it’s possible to dance with such fierce colourful joy while shouldering a legacy of so much pain.

Though there are twenty different offerings within this collection this is not a long read and, in the case of some of the specific ones I’ll shoutout below, I wish it had been longer. I can’t possibly know the impact of what this collection will do for readers who see themselves, or their parents, or their loved ones, in these stories but I have a feeling this’ll mean a lot for a lot of people.

I understand that for many Americans — including my own parents — being seen as American is a struggle that can be tiring and long.

As for those standouts? These were mine.

Coco Chamoy y Chango by E.E. Charlton-Trujillo was the first one to make me wish there had been more to it. I wanted to keep reading, I wanted to learn more about these characters, and where they were going. It was such a casual little snapshot in time but it made an impression.

Next was My Name is Dolores by Guadalupe Ruiz-Flores and, to quickly sum up, it broke my heart. The image of that little girl.. well, I won’t spoil. But it was one of those little big moments that leaves quiet devastation in its wake.

An Ode to My Papi by Guadalupe García McCall might have been the shortest of the bunch but.. I don’t want to call it lovely, because it was also so sad, but it was a bittersweet, heartwarming, heartaching little tribute. Though there’s nothing little about the message.

Finally, there was La Princesa Mileidy Dominguez by Rubén Degollado which snuck up on me. It wasn’t that I wasn’t invested in the story as it unfolded but it wasn’t until the final paragraph or two when I realized how much I had softened as the story went on until I found myself brushing away tears. Partially it was the importance of the celebration described, the moment of transition from child to young adult, but it was more how this group of strangers, this community, came together without hesitation. It was incredibly moving.

There was one more quote I really wanted to share so I’ll use it to sign off this review but suffice it to say yes, I had some favourites, but most of the quotes I’ve pulled didn’t even come from those stories I’ve mentioned. There was something different, something important, something moving, in everything offered in this collection. And also something for everyone.

I’m so tired of these trying political times, and I’m tired of trying to care about the newest protests and the hashtags and the kids who die or almost die and get fifteen minutes of fame from the adults who have all the money and the clout and the thoughts and prayers but don’t actually do anything.

Here’s a collection of short stories to push you right into your emotions and some of them are going to be discomforting ones. From the first story of this anthology of stories/poems/letters from people who have straddled the Mexican/American borders, I was absorbed. These stories made me angry and hopeful, sad and in awe.

While I appreciated them all, here’s a flavour of some of the ones that either hit me in the gut, educated me or transported me to someone else’s experience (sometimes all of these things).

Ghetto Is Not An Adjective by Dominic Carrillo took a chance encounter and made an impact through poetry, ignorance felt like it was the theme for this story.

“There Are Mexicans In Texas?” by Trinidad Gonzales really conveyed the importance of family history to how he’s navigated peoples’ ignorance and racism at various junctures. These familial stories seemed to ground the author’s sense of self. I could have read his experiences and anecdotes for much longer. This quote really hit home and has relevance to other countries too:

The struggle to belong is found not only in the politics of the street, but in official institutions that are supposed to be inclusive of all Americans.

Ode to My Papi by Guadalupe García McCall squeezed my heart in a mere moment on the paper. So much was conveyed in a short space.

There were so many others to mention, but I wanted to give a dynamic snapshot of what’s on offer here.

I live overseas but I read and watch these issues, wanting to know more, especially when tensions were heightened under the 45th POTUS’ control. This book afforded me a deeper dive into individual experiences both fictionalised and non-fiction. I recommend this to all and it is definitely suitable from teenage upwards.

The editor/author provided me with a early copy through netgalley but this has not influenced by review.