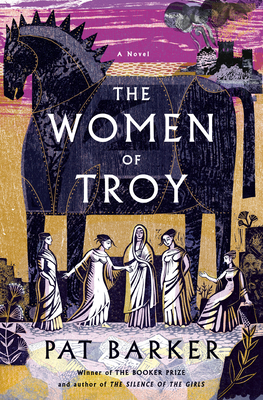 Following her bestselling, critically acclaimed The Silence of the Girls, Pat Barker continues her extraordinary retelling of one of our greatest myths.

Troy has fallen. The Greeks have won their bitter war. They can return home victors, loaded with their spoils: their stolen gold, stolen weapons, stolen women. All they need is a good wind to lift their sails.

But the wind does not come. The gods have been offended – the body of Priam lies desecrated, unburied – and so the victors remain in limbo, camped in the shadow of the city they destroyed, pacing at the edge of an unobliging sea. And, in these empty, restless days, the hierarchies that held them together begin to fray, old feuds resurface and new suspicions fester.

Largely unnoticed by her squabbling captors, Briseis remains in the Greek encampment. She forges alliances where she can – with young, dangerously naïve Amina, with defiant, aged Hecuba, with Calchus, the disgraced priest – and begins to see the path to a kind of revenge. Briseis has survived the Trojan War, but peacetime may turn out to be even more dangerous…

The Women of Troy picked up the story immediately after the end of The Silence of the Girls. It amazed me that a successful outcome of the war didn’t really change dynamics in the camp. The men still treated the women terribly, used and abused them with zero respect. The men across the ranks were petty and egotistical, none more than those who were senior. Again, with this installment, I found there was hardly a man to cheer for. Expect to feel emotions of anger at the misogyny and abuse.

I enjoyed hearing the story from Briseis’ perspective; she really was a character to admire. She was all about survival but she maintained a degree of integrity and compassion for her female companions and occasionally for some men. When the story flipped on occasion to one of the male’s perspectives, I was less invested but Briseis carried the majority of the story.

The narration was superb and the emotional temperature of the camp was translated well.

This story definitely is on the heavier end of spectrum for Greek mythology/ancient history fiction. The detail was both welcome but also at times slow in pacing. I did prefer the first installment of this series but I’m also glad I saw this story through to it’s completion. It ends in a place of possiblity of more but I’m not sure if this is the plan.

Thank you to netgalley and Penguin Audio for the early review copy.

Follow A Take from Two Cities on WordPress.com
Join 1,947 other subscribers