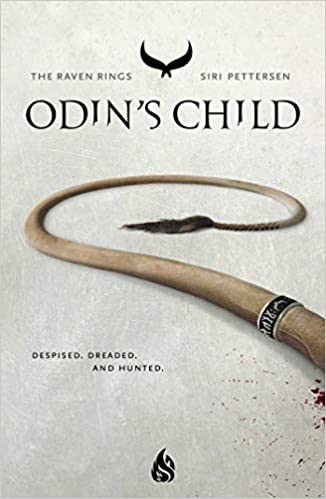 An epic fantasy trilogy from Norway about thousand-year-old secrets, forbidden romance, and what happens to those who make a deal with the devil comes at last to the United States!

“Imagine lacking something that everyone else has. Something that proves you belong to this world. Something so vital, that without it, you are nothing. A plague. A myth. A human.”

Fifteen winters old, Hirka learns that she is an Odin’s child – a tailless rot from another world. Despised. Dreaded. And hunted. She no longer knows who she is, and someone wants to kill her to keep it a secret. But there are worse things than humans, and Hirka is not the only creature to have broken through the gates…

‘Odin’s Child’ is unique fantasy with Norse roots. An epic clash of xenophobia, blind faith and the right or will to lead.

The first in a trilogy, Odin’s Child is a thrilling modern fantasy epic.

Whilst the title might suggest a link with old Norsk gods, it actually doesn’t refer to that lore or known belief system at all. The phrasing ‘odin’s child’ isn’t necessarily explained (nor is much else) but it refers to Hirka, the girl poised on womanhood being not of the world she was born into but from another world.

Things I liked about the book were some of the characters like Hirka (MC), Rime and Errik but the story and the world never grabbed me. The plot was long and convoluted and when you lacked the foundations or explanations as a reader, it really was frustrating. I stuck around for the characters.

This was a long book and to be honest, I spent much of it confused. There is no show and no tell, you just have to stick around for 500+ pages to get some sense of the world building and these tenets – the might, the blind, binding, the rite. I remain confused about some elements of the world, even at the end.

I did have to have a conversation with friend who read it to help decide whether to dnf or stick with it. Am I glad I stuck with it? I’m not sure to be honest and sadly, I don’t see myself continuing with the series.

Thank you to the publisher for the early review copy.