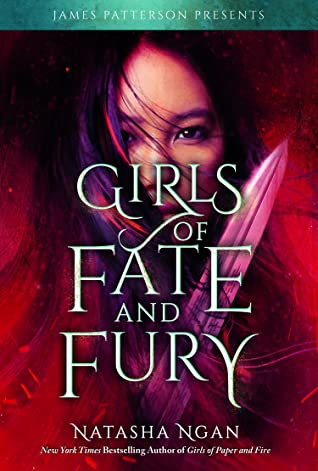 The epic romance of Lei and Wren comes to a breathtaking conclusion in the explosive finale to the acclaimed, New York Times bestselling Girls of Paper and Fire series.

‘Don’t struggle, Lei-zhi. It’s time to take you back to the Hidden Palace. You’re going home.’

The jaw-dropping conclusion to Girls of Storm and Shadow left the fates of Lei and Wren hanging in the balance. There’s one thing Lei knows – she can never return to the Hidden Palace. The trauma and tragedy she suffered behind those opulent walls will plague her forever. She cannot be trapped there with the sadistic king again, especially without Wren.

The last time Lei saw the girl she loved, Wren was fighting an army of soldiers in a furious battle to the death.

With the two girls torn apart and each in great peril, will they reunite at last, or have their destinies diverged forever?

“Anyway, suffice it to say I’m still waiting to be won over by this series and at this stage I can only hope it ends well. It’s a pretty low bar for me at this point.“

That was how I left off my review for book two in 2019. Suffice it to say.. hopes were dashed. Having said that, though, this was not the series for me and I think I mostly knew that by book one. So no one is surprised by this result and also, you know, grain o’salt.

Also please note I’m only putting in this low-bar effort to review because we have reviews for the first two books on the blog. Otherwise this likely would’ve only existed on GR. Aren’t you all lucky.

I found the first half of this finale to be an utter and total slog to get through — true, I could remember almost nothing about how book two ended, or much about book two in general because it being a journey-centric instalment. But I soon remembered enough to get by. And even still, despite the bonus of having a new POV, nothing sparked joy or excitement. There was some minor enjoyment, or at least I was dialled in, for about twenty percent near the middle, but once that had passed.. more slog. Somehow, despite everything going on, especially a certain reveal near to the end, there was so intensity. There was no dramatic sense of stakes or danger or anything. Which I think is my whole issue with both the story and the writing : while sometimes emotion is conveyed, I can never actually feel it.

I can absolutely understand why people not only love this world but also the representation found within the pages as well as identifying with the characters. I appreciate all of those things. But that’s as far as it goes.

I doubt I’ll read this author again but I’m glad to have completed this series, and have one less unfinished story hanging over my head.