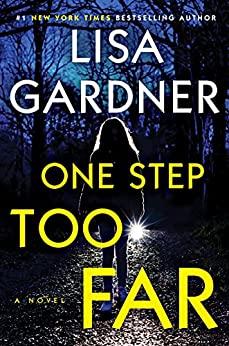 From #1 New York Times bestselling author Lisa Gardner, a thrilling new novel that sends Frankie Elkin into the woods in search of a lost man–and the shocking truth about why he went missing in the first place.

Frankie Elkin, who readers first met in Before She Disappeared, learns of a young man who has gone missing in a national forest. Law enforcement has abandoned the search, but a crew of people led by the young man’s father are still looking. Sensing a father’s desperation, Frankie agrees to help–but soon sees that a missing person isn’t all that’s wrong here. And when more people start to vanish, Frankie realizes she’s up against something very dark–and she’s running out of time.

When I started this follow-up instalment in Gardner’s new series, featuring something of a lone-wolf cold case investigator (though not a professional one, just a concerned and capable citizen), I did not expect to cry as much as I did. But maybe that’s just me being a softie as always.

“Now, the emergency whistle.”
“I have a whistle! I carry it around tough neighbourhoods all the time.”
“Your idea of self-defence in an urban environment is a whistle? Are you trying to die?“

This particular case that Frankie stumbles her way into is so very different from the first we experience through her. Gone are the mean streets of Boston; say hello to the wilds and dangers of Wyoming. She hears about the fifth year anniversary — and final hail mary search — of a missing man who went camping with his groomsmen for their bachelor party and later disappeared. She manages to negotiate her way into the hiking expedition and from then on it’s exhaustion, sweat, secrets revealed, and everything going wrong.

“I hate pity.”
“Then stop being so pathetic.”
“I hope Bigfoot kicks your sorry ass.“
“Wouldn’t that be something? Please take video.”

As I feel is often the case with Gardner mysteries, I did not see the reveal for this one coming. I had suspected something very different and was way off base. But this wasn’t one of those twists that come totally out of left field, either. So I loved that.

“I thought you mountain-guru types were supposed to be able to sniff the dirt, lick a pine cone, then state unequivocally who came here at what date and time, not to mention their favourite food and astrological sign.“
“I know you’re a Virgo, does that help?“
“How do you know that?“
“Because you’re a pain in my ass.“

I also loved all the new characters we were introduced to. Which is probably why I cried so much. Plus there’s a dog! But in addition to the new faces, I still really liked Frankie — or rather, maybe stated to like her more, as I don’t know if I appreciated her in book one the way I did in this one. Her internal monologue is a little repetitive when she gets going and thinking about her past, her life up until now, but it also makes sense considering her pile of regrets and the fact that she’s a recovering alcoholic. But I like the concept of her, this rogue individual, the fact that she’s lived a hard life and is committed to doing for other people, and also that she’s middle aged and not a spring chicken.

If a dog can do this, I tell myself, than I can, too. Of course, the dog has had way more training.

The whole unravelling of this mystery worked so well; the stakes were high, the players all had varying levels of expertise and capabilities, and again, the reveal? So good. I also really enjoyed how contemplative Frankie was near the end and how this story wrapped. That whole section was lovely.

Why do I do what I do? Because at the end of the day, the people left behind matter as much as the ones who are missing. We mourn the ones we’ve lost, but we agonize over the pieces of ourselves they took with them.

I’m always excited for new releases from this mystery/thriller author and I am happy to say I’ll now be as excited for a new Frankie book as I would be for a new DD book. Give me anything from this author. Looking forward to the next!