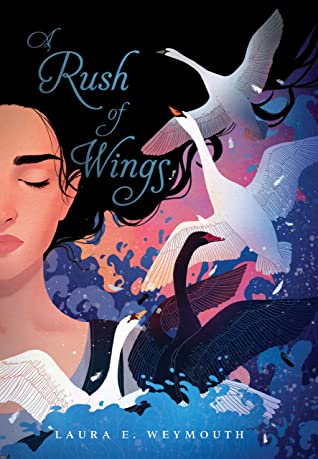 Rowenna Winthrop has always known there’s magic within her. But though she hears voices on the wind and possesses unusual talents, her mother Mairead believes Rowenna lacks discipline, and refuses to teach her the craft that keeps their Scottish village safe. When Mairead dies a sinister death, it seems Rowenna’s one chance to grow into her power has passed. Then, on a fateful, storm-tossed night, Rowenna rescues a handsome stranger named Gawen from a shipwreck, and her mother miraculously returns from the dead. Or so it appears.

This resurrected Mairead is nothing like the old one: to hide her new and monstrous nature, she turns Rowenna’s brothers and Gawen into swans and robs Rowenna of her voice. Forced to flee, Rowenna travels to the city of Inverness to find a way to break the curse. But monsters take many forms, and in Inverness Rowenna is soon caught in a web of strangers who want to use her raw magic for their own gain. If she wishes to save herself and the people she loves most, Rowenna will have to take her fate into her own hands, and unlock the power that has evaded her for so long.

So there were three big, huge, reasons why I almost never read this book. One being that the fairytale this is inspired by also inspired my actual favourite book of all time (ten points if you’ve been here long enough to know which one) and so naturally nothing could ever measure up; two, I had already read another Six Swans inspired YA retelling this year (two back to back after all this time? it was weird!), and three, this is my third attempt reading this author after two massive fails and the only reason I broke my promise to never read her again was because of the premise. Spoiler alert, I probably am issuing that promise again because, as you can tell from the rating, this wasn’t a win. But.. it also wasn’t a fail.

The best part about this version of the story was the writing. Weymouth did a great job bringing me onto the rocky misty shores of this random village (or whatever) while bringing into focus the historical setting and tumultuous past of Culloden and an occupied Inverness. It made for a very real but mundane kind of danger while abutting all the fey dangerous magic, and also creatures, that was also present in this world. It certainly wasn’t perfect (I am still side eyeing the fact that the guards never saw the four boys going back and forth from within the castle or grounds or whatever while Rowenna was captured but, you know, we trudge on) but I could get swept up in it.

Where things didn’t work was.. well, almost everything else. This version definitely mixes things up; Rowenna is no Sorcha and I’m glad of that. I actually appreciated that she wasn’t the darling, wasn’t sweet, wasn’t easy, and was battling not just the curse but also herself. The lack of six brothers also speeds things up a bit for her as she has less curse breaking to do. But at the same time another hundred pages would’ve done a lot for this, I think. Mostly in giving us more familial dynamic because honestly beyond the general hope for her brothers to be returned to her, we didn’t know them well enough, or get enough foundation of their relationships and dynamics to root for them beyond principle — once they stopped treating Rowenna badly, at least. Which also applies to the love interest.

Strangely the strongest relationship or bond was between Rowenna and a sea creature. Now that could’ve been a story..

In all honesty, though, the absolute weakest part might have been the magical villain (as opposed to the human one) because I don’t quite think I ever understood their actual goal. Even in the end, when we see the devastation wrought, I’m still like.. (insert Ryan Reynolds, “but why?” gif here).

As for the aforementioned human villain, well.. the scene that almost made me chuck the iPad across the room is when Rowenna has an opportunity to triumph and does not. Like, yeah, I get it, but wow. Considering all the devastation he was responsible for, wow. But sure, get on that high horse. However what’s worse is how she initially ends up in his hands, and forced to do his bidding, and that whole little plot and.. I don’t know. I’m mixed about it all.

So, yes, incase you were wondering, this wasn’t a win and I don’t think it’s all to do with my bias though I’m sure that plays a part. If you’re a fan of this retelling, or just think it sounds up your alley, I would cautiously recommend, especially with the Scotland setting and uprising in the mix. H o w e v e r, while I’m normally not one to spell things out, I do want to caution you that if animal death or violence done to animals is a big trigger for you? Even when it’s somewhat spelled out without being graphic (if that makes sense)? Stay away.

Follow A Take from Two Cities on WordPress.com
Join 1,947 other subscribers