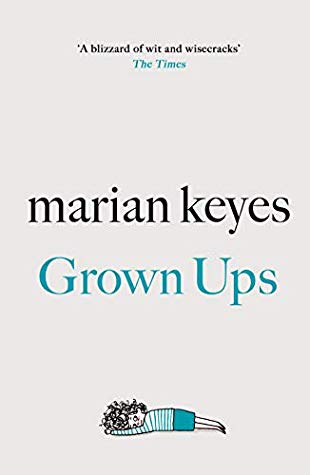 They’re a glamorous family, the Caseys.

Johnny Casey, his two brothers Ed and Liam, their beautiful, talented wives and all their kids spend a lot of time together – birthday parties, anniversary celebrations, weekends away. And they’re a happy family. Johnny’s wife, Jessie – who has the most money – insists on it.

Under the surface, though, conditions are murkier. While some people clash, other people like each other far too much . . .

Everything stays under control until Ed’s wife Cara, gets concussion and can’t keep her thoughts to herself. One careless remark at Johnny’s birthday party, with the entire family present, starts Cara spilling out all their secrets.

In the subsequent unravelling, every one of the adults finds themselves wondering if it’s time – finally – to grow up?

GROWN UPS as you might guess, really showed what a mess grown ups can be. This was a family saga of epic proportions both in length of book but also in depth of shambled relationships and lives. This was definitely a less funny offering from Marian Keyes, but I wouldn’t have minded the lack of humour if the story had worked better for me.

The story centred on three families, brothers, wives and children. The brothers weren’t particularly close but the other people around them included some particularly strong personalities in Jessica, Ferdia, Nell and Liam. The character I probably liked the most was Nell but like is too strong a word, the rest of them I disliked or felt ambivalent about. I didn’t make connections with the characters as I had hoped at all.

The pacing of this story is somewhat slow, every element of the story was told in great depth, usually from multiple perspectives. So you can imagine that it takes 650 pages. This was like observing a slow motion house of cards collapsing over time. At the end, I did not feel wowed in any way or particularly satisfied at any of the outcomes.

I’m sad about this book, having read most of Marian Keyes books but you can’t like them all, I guess.

Thank you to Michael Joseph for the early review copy.