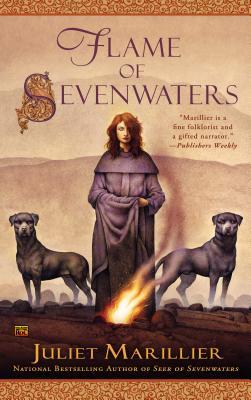 Maeve, daughter of Lord Sean of Sevenwaters, was badly burned as a child and carries the legacy of that fire in her crippled hands. After ten years she’s returning home, a courageous, forthright woman. But while her body’s scars have healed, her spirit remains fragile, fearing the shadows of her past.

Sevenwaters is in turmoil. The fey prince Mac Dara is desperate to see his only son, married to Maeve’s sister, return to the Otherworld. To force Lord Sean’s hand, Mac Dara has caused a party of innocent travelers on the Sevenwaters border to vanish—only to allow their murdered bodies to be found one by one.

When Maeve finds a body in a remote part of the woods, she and her brother, Finbar, embark on a journey that could bring about the end of Mac Dara’s reign—or lead to a hideous death. If she is successful, Maeve may open the door to a future she has not dared to believe possible….

Headlines:
Riding the waves of all the feelings
Animals to break and heal your heart
Family

This series means so much to me now, finishing this last book on such a high has been emotional, wonderful and special. This series across generations has connected me to the Sevenwaters family and characters in the most unforgettable way.

Flame of Sevenwater brought us back to Maeve who we last saw in tragic circumstances in book three. This book represents disability so well, with realism, difficulty but also in an empowering way, showing Maeve’s autonomy and determination. Maeve was an easy character to love, a true heroine with biggest heart. Her skill, love and care towards animals was everything.

Bear, Badger, Swift, Finbar and the snatch we saw of Becan were so much of my favourite parts of this story. While I saw where the plot was ultimately going, there was one genius twist towards the end that pulled me back from ‘how could she do this to us again’ to Marillier is a genius’ territory.

That’s it. I’ll be over here in my emotions, my soggy tissues and in our buddy reading DMs until I’ve run out of gush.

2022 has been off to a slightly shaky start but sinking into a Sevenwaters book was just what I needed; even though this was a bittersweet undertaking knowing it was the last in the series.

This world has such a special place in my heart, as I’ve gone on about endlessly, and it was so nice to have a reread, with some special friends, and also have the opportunity to finally reread the companion trilogy. They don’t quite hold a candle to the originals but each are special in their own way. And with Flame of Sevenwaters, Maeve’s story, we had a culmination of everything these last books had been leading up to whilst also having something of an homage to the original book that started it all.

“If I were telling a story of Sevenwaters — and it would be a grand epic told over all the nights of a long winter — I would surely end it with a triumph. A happy ending.”

And it is. A happy ending; as much as one can have in a Marillier story, at least. Maybe not in the obvious way for everyone, and certainly it isn’t an end for all, but there is an ending of a kind and happiness to be found for many — some immediately and some to come. And that’s what has always been a marvel about this world. It is so real, full of complex and complicated characters, differing motivations even within the same family, different priorities, but always a strong love, a strength of character.

We don’t get a full reunion of all the siblings in the way many series-enders get but we did get a few people together again — even as a few bid farewell — and it was more special because of that, and less overwhelming, too. There are too many standout characters to have seen them all and there were enough updates along the way that those characters without page time still felt seen.

As for Maeve, I love that Marillier gave us a heroine with a disability. We’ve seen a main character before that had a different physical challenge, though in that case it had less to do with how others treated her and more about how she looked upon herself. In some ways it was also easier to hide. In this case it was very much out in the open and while Maeve wasn’t without some self-pity on occasion it was more in light of how others treated her vesus how she often felt about herself. Additionally, it was a disability that needed not just strength to endure but trust in those around her; both in knowing how much she could push herself, or be capable of, but also to trust they not be embarrassed or ashamed of her. Which makes coming back to Sevenwaters, after so long away, and to where she had been hurt, all the more frightening and challenging. But Maeve does it; not for herself but for a charge in need of her strength. A strength that plays a key role in the inevitable confrontation with the Big Bad.

I had done my best not to weep. I had tried not to feel sorry for myself. It came to me that it is not trials and travails that bring us down, but unexpected moments of kindness.

This one didn’t get me quite as emotional as many other in this series but there were plenty of feels during many interactions between Maeve and her brother and also with Ciarán. Once again this unlikely character from the main trilogy has had a chokehold on me for every book that has followed book three and I love that this book made a point to highlight his impact; not just on the others but the impact on him, too.

As for the romance, well. This one may surprise you a little but if you followed the breadcrumbs.. maybe not. I’ll admit things do rush ahead a bit during the big moments, which was a bit of a pacing whiplash after all the dragging on prior to the conflict (I found myself rather impatient during these scenes, maybe because I just wanted all to finally be revealed? don’t know), but we get a few calmer quiet scenes to solidify all the big dramatic outpourings. And, again, as we have seen before, I like that things aren’t quite all wrapped up and signed, sealed, delivered by the final page. But we know they will be.

My issue with the pacing notwithstanding, this might be my favourite of the companion trilogy just for how much it gave me some original series vibes while still being very much it’s own creature. It was a nice way to book end this series and it definitely ends things on a higher note than the last two. I’m so pleased my Sevenwaters Squad feels the same way, too, as this whole journey was all new for them and I didn’t want them to come out feeling disappointed in any way after all my hype and bother.

With the series wrapped, we might not be the Sevenwaters Squad any longer but there’s plenty of Marillier still to consume. Maybe we’ll be the Marillier Maniacs instead? Who knows.

If you still have yet to discover this series, or this author, I cannot recommend her enough. With stories full of heart, wisdom, respecting the earth and hearth, feats of strength of all kinds, love stories that truly conquer all, magic and sacrifice, the bonds of family, heartbreak and healing, and so much more, you can’t go wrong.

Follow A Take from Two Cities on WordPress.com
Join 1,923 other followers