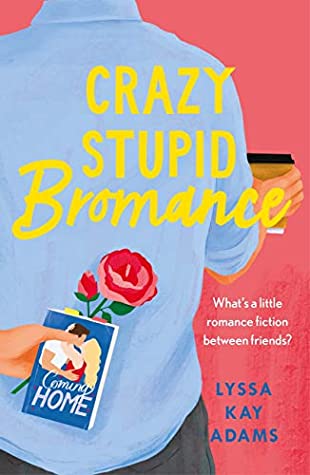 The first rule of book club:
You don’t talk about book club.

Alexis Carlisle and her cat café, ToeBeans, have shot to fame after she came forward as a victim of a celebrity chef’s sexual harassment. When a new customer approaches to confide in her, the last thing Alexis expects is for the woman to claim they’re sisters. Unsure what to do, Alexis turns to the only man she trusts – her best friend, Noah Logan.

Computer genius Noah left his rebellious teenage hacker past behind to become a computer security expert. Now he only uses his old skills for the right cause. But Noah’s got a secret: He’s madly in love with Alexis. When she asks for his help, he wonders if the timing will ever be right to confess his crush.

Noah’s pals in The Bromance Book Club are more than willing to share their beloved ‘manuals’ to help him go from bud to boyfriend. But he must decide if telling the truth is worth risking the best friendship he’s ever had.

This was my favourite of the series so far. It was the loveliest friends-to-more story with a strong serious theme to underpin the comedy and banter. Noah and Alexis worked so well as a main couple rather than the side characters we’ve seen them as before.

What I enjoyed was that there was no speed in their feelings or relationship development as they’d been doing all that best friend building for the last year. I don’t want to spoil the foundational story but it was emotional and struck more than one gut punch. Despite that, the rom-com elements were kindle-highlighting gold.

The maine coon Beefcake was a low-key sensation, I love when there is pet-personality in a story. Beefcake had personality and more, perfect for October because he was pretty evil.

Noah jogged down the stairs, leaping just in time off the bottom step ton avoid an assassination attempt by Beefcake. The f****** cat hated him. He liked to make himself known in the shadiest way possible.

Alexis’ family was something, a real push and pull of hate and love. But found-family was everything, none more than the Bromance Book Club. The book featured this time ‘Coming Home’, I’m so tempted to read it after its life lessons!

There’s something about this series that keeps me coming back for more. I find the premise for the series and the characters endearing and funny and I’ll be more than happy to read a book four.

Thank you to Headline Eternal for the early review copy.