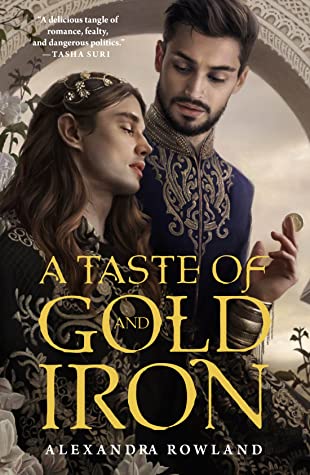 The Goblin Emperor meets “Magnificent Century” in Alexandra Rowland’s A Taste of Gold and Iron, where a queer central romance unfolds in a fantasy world reminiscent of the Ottoman Empire.

Kadou, the shy prince of Arasht, finds himself at odds with one of the most powerful ambassadors at court—the body-father of the queen’s new child—in an altercation which results in his humiliation.

To prove his loyalty to the queen, his sister, Kadou takes responsibility for the investigation of a break-in at one of their guilds, with the help of his newly appointed bodyguard, the coldly handsome Evemer, who seems to tolerate him at best. In Arasht, where princes can touch-taste precious metals with their fingers and myth runs side by side with history, counterfeiting is heresy, and the conspiracy they discover could cripple the kingdom’s financial standing and bring about its ruin.

This is a tough one to review. Because I had all sorts of feelings about it — one of which was, I read the first chapter and had such a visceral “nope” feeling about it that I put down the kindle and walked away for an hour — but mostly those feelings were ambivalent. And then occasionally frustrated because I was seeing things I could love but the love was just out of reach.

The good? The tropes. There’s an A03-style list of tags for what you can find in this book, I won’t list them out but they are easy to find if you go looking, and most of them are delicious. And honestly how they played out was also, mostly, delicious. And actually most of what I found to be good in this story was the romance because I did like these characters; one was easier to love than the other as he was more fleshed out, but the other had a good bit of unlayering from how he started out, too, so it didn’t feel too unbalanced. They are caught up in a complicated dynamic, and even though there was some angst due to pining and yearning and feeling unworthy being caught up in that, the dialogue that the author leaned on to express consent, reciprocity, the morality/ethics of it all, and understanding between them, was so good.

The less good? The world. For all the prose and descriptions, not to mention the wordcount, I did not have a good handle on the setting or the politics and found the conflict of the plot kind of flimsy. It didn’t help that we were thrown right into things near the beginning and, as mentioned, I really wasn’t feeling it — the first chapter really jarred me but that feeling stuck with me for like 30%. But we definitely had some sweet spots.. though the ending, too, as in the final page, was also jarring (is this a series? or is that just how it wraps?).

Split down the middle? The supporting cast. We had some really good eggs mixed in with our MCs and we also had some less good. Equally, we had some good eggs that just acted in frustrating ways and for reasons that are never truly explained but, of course, forgiven. Part of that supporting cast is a strong presence of queerness and identities interwoven in this world and zero homophobia. Huge win.

So, yes, if this romance-centric high fantasy did well by the romance, why such a low rating? I still felt the slowness of the background fantasy/action plot, and sometimes when there should’ve been urgency, there wasn’t, and I found that a bit jarring. I wish that the villain(s) of the piece had been a bit less obvious because it might’ve added more uncertainty and, again, given us some of the tension that was lacking. And, again, there was that ending — just as I was really feeling things were on the up I feel like I misstepped and was left stumbling a bit, which has me not wanting to round up.

Overall, while there are elements within the whole that could be worth a recommend, I would definitely hesitate to encourage anyone give it a try who wasn’t already going to.

** I received an ARC from Edelweiss+ and the publisher (thank you!) in exchange for an honest review. **