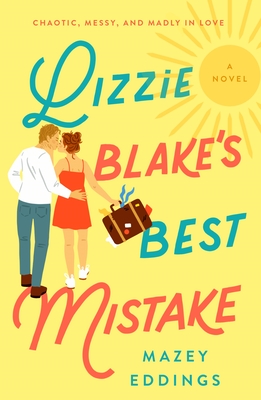 Lizzie has made endless mistakes. Kitchen fires, pyramid schemes, bangs (of the hair and human variety), you name it, she’s done it… and made a mess of it too. One mistake she’s never made is letting anyone get closer to her than a single hook-up. But after losing yet another bakery job due to her uncontrolled ADHD, she breaks her cardinal rule and has a two-night-stand that changes everything.

Once burned, twice shy, Rake has given up on relationships. And feelings. And any form of intimacy for that matter. Yet something about charming, chaotic Lizzie has him lowering his guard. For two nights, that is. Then it’s back home to Australia and far away from the pesky feelings Lizzie pulls from him. But when Lizzie tells him she’s got an unexpected bun in the oven, he’ll do whatever it takes to be a part of his child’s life… except be emotionally vulnerable, obviously. He’s never going to make that mistake again.

So clearly I only ever read the first paragraph (if even that) of the synopsis because after finishing this book, and realizing what makes up the majority of the content, I was sure the synopsis was cheekily dodging this particular trope. But no. It’s right there, in paragraph two : unexpected baby. Yikes. So, yeah, this one’s on me, folks. But here’s your warning incase you missed that, too.

Obviously (well, maybe not) this isn’t only about these two strangers who have to deal with the unplanned (despite their best intentions) consequences of their hook-up gone unexpected. We also have a lot of dialogue, discussion, and dealing/living-with adult ADHD and the various processing struggles and tricks required to function. Not only function but thrive. And, at the same time, finding the people around you — platonic or otherwise — who cherish you regardless and don’t treat you as a burden. Which is what one of our MCs was brought up to believe. The other has his own baggage, too, but it’s a little more in line with standard romance stuff; except for one thing that is sorta used as motivation (maybe not the right word, I’m struggling with how to phrase this without being too obvious, even though I want to shout about it from the rooftops; though I won’t) for why he is so quick so early on to jump in on making their partnership work. I won’t say more but there are layers that, even though it’s explained and there doesn’t seem to be an intent to villainize the situation, it just may not work for some readers because I think it’s a fine line on how it may come across — especially right now. And honestly while I understand to some degree why the author included it, it could’ve easily just not been there.

Overall, nothing about this made me mad — not even the thing I went on about above, I just kind of did a mental dodge around it; not even the baby stuff (which, by the way, I’m not anti-baby, I just don’t prefer them to be the focus and it was mostly the only plot-related conflict). But it’s just obviously not my jam. There were some emotional beats, some of the ADHD representation was interesting to read about as I’m not aware of anyone in my life with that diagnosis and certainly not read it described in the way the author did here, and some of the ‘trying to remain platonic while lusting after each other’ hijinks were entertaining. But I just didn’t connect. I didn’t laugh. And I was only minorly impacted by some of the aforementioned emotional turmoil.

This is Eddings’ second release and neither have quite landed for me, though both in different ways. I can definitely see why people on my flist are already enjoying this, and why others will still enjoy it. To each their own! I might give her one last shot (three strikes, you’re out!) before throwing in the towel though.