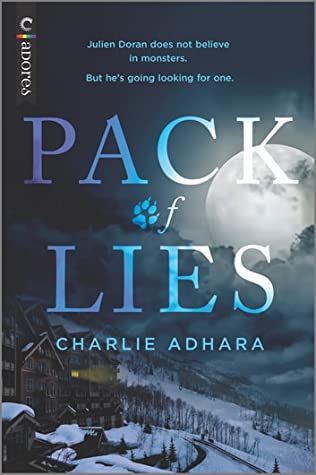 Julien Doran arrived in sleepy Maudit Falls, North Carolina, with a heart full of hurt and a head full of questions. The key to his brother’s mysterious last days might be found in this tiny town, and now Julien’s amateur investigation is starting to unearth things the locals would rather keep buried.

Perhaps most especially the strange, magnetic manager of a deserted retreat that’s nearly as odd as its staff.

Eli Smith is a lot of things: thief, werewolf, glamour-puss, liar. And now the manager of a haven for rebel pack runaways. He’s spent years cultivating a persona to disguise his origins, but for the first time ever he’s been entrusted with a real responsibility—and he plans to take that seriously.

Even if the handsome tourist who claims to be in town for some R & R is clearly on a hunt for all things paranormal. And hasn’t taken his brooding gaze off Eli since he’s arrived.

When an old skeleton and a fresh corpse turn a grief errand into a murder investigation, the unlikely Eli is the only person Julien can turn to. Trust is hard to come by in a town known for its monsters, but so is time…

Sometimes, I swear you’re damned if you do and damned if you don’t. In this particular sense, I’m talking about rereads. I made a point to reread the Big Bad Wolf series prior to this spin-off series opener because I wanted everything fresh in my mind for any carry-over plots and characters. And I’m glad I did. I’m also glad I put two weeks between finishing those and starting this, just so there wouldn’t be too much of a good thing in my brain. But.. I think it also made me love this a little less.

Don’t get me wrong, there’s a lot to love here. Eli being the number one thing. Eli was perfect. His dialogue, his wit, his whole being. There was no wrong done. And while I liked Julien, and did think there was some chemistry in their intimacy, outside of it..? It just wasn’t as electric. I wasn’t desperate for them to interact, to bounce off each other, or even to bone — though hey, again, those were good times. There was really only one moment, where Julien asked to be friends (if you know you know!), that socked me in some feels.

Having said that, when I did my reread, I knocked some ratings up a star. So maybe this is another one I’ll love more in hindsight when it’s all said and done? Historically that seems to be the case with Adhara. We might eventually find out.

Oh, what’s this all about you ask? Well, it’s a queer paranormal shifter mystery! This new series (which, by the way, I would not recommend starting here; go back to the beginning and meet Cooper and Oliver!) features a secondary character from the main series, one who has not had an easy life (some backstory reveals in the main series, hint hint), and who is now part of a new start-up pack and is heading the running of a “retreat” (as far as humans know) which is a front for a shelter, or a safe place, for wolves. He’s barely there long enough to get the place running before hijinks ensue that have him threatened by a nearby pack, put a human who is clearly hiding things in his path, and more. Said human, Julien, eventually convinces Eli to team up and try to uncover.. well, more than a few things. How’s that for vague and unhelpful?

But yes, while I’m not shouting praise from the rooftops like I expected, this could just be me a little overwhelmed by my own expectations, and also too much Ollie and Coop too recently in my reading (and forever in my heart). It does not mean I am in any way not excited for more. I want Julien to grow on me. I want more hijinks. I want more Eli fullstop. And, in general, I just love this world and Adhara’s writing. Also, I’m clearly an outlier; just look at all those five stars! I’m not disappointed by this rating. And you shouldn’t be put off, either.