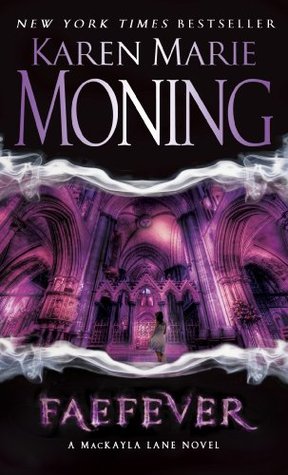 He calls me his Queen of the Night. I’d die for him. I’d kill for him, too.

When MacKayla Lane receives a torn page from her dead sister’s journal, she is stunned by Alina’s desperate words. And now MacKayla knows that her sister’s killer is close. But evil is closer. And suddenly the sidhe-seer is on the hunt: For answers. For revenge. And for an ancient book of dark magic so evil, it corrupts anyone who touches it.

As All Hallows’ Eve approaches and the city descends into chaos, as a shocking truth about the Dark Book is uncovered, not even Mac can prevent a deadly race of immortals from shattering the walls between worlds—with devastating consequences.…

I can’t tell if this actually deserves to be rounded up or if, after a bit of a reading dry spell, I’m just excited to have finished something — and in one sitting no less. <– oh hey, deja vue, this was the same situation I was in for book two! Though I think I’m in (or was in..) an actual slump this time. It’s rough out here.

It bears repeating that : I think we all know the deal with this series. It is definitely a product of it’s time. But we are already seeings signs of where Moning pushed her characters, and the series, away from their awkward beginnings.

Having said (again) that, this particular instalment slows things all way down. While book two was nonstop action, we had very little action in the third. It really decided to embody the term “slow burn”. And then of course leaves us on that cliffhanger (if you are familiar with the series but, like me, struggle to piece together which came when, here’s a hint : the cover). Once again, I found myself unprepared for how early this particular event happened. It really just was a blur that first time around, huh?

But. This particular event is (if my memory is to be trusted which, spoiler, it is not) does kick off a certain relationship in a certain direction. Otherwise though yeah that final chapter changes everything for everyone in this series. Though it doesn’t change the fact though that this was one big (slow) build to that finale; so it does feel a bit like a transitional/lead-up instalment. Which isn’t a bad thing because I feel like the next one does not pull punches so maybe we needed this calm before the storm.

Either way, I’m excited to dissect this one with my buddy reader (we already cackled about the MacHalo and I mean.. if you know you know) and, more broadly, I’m hoping this read can wiggle me out of the slump.