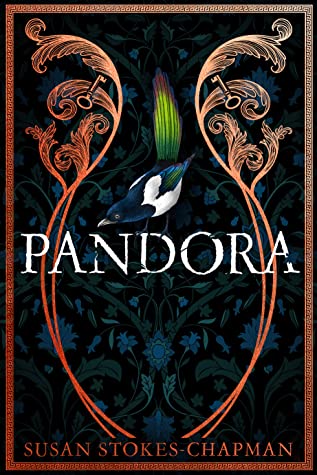 London, 1799. Dora Blake is an aspiring jewellery artist who lives with her uncle in what used to be her parents’ famed shop of antiquities. When a mysterious Greek vase is delivered, Dora is intrigued by her uncle’s suspicious behaviour and enlists the help of Edward Lawrence, a young antiquarian scholar. Edward sees the ancient vase as key to unlocking his academic future. Dora sees it as a chance to restore the shop to its former glory, and to escape her nefarious uncle.

But what Edward discovers about the vase has Dora questioning everything she has believed about her life, her family, and the world as she knows it. As Dora uncovers the truth she starts to realise that some mysteries are buried, and some doors are locked, for a reason.

Gorgeously atmospheric and deliciously page-turning, Pandora is a story of secrets and deception, love and fulfilment, fate and hope.

Headlines:
Creepy atmosphere
Plundering of other countries
You can literally smell the evil

Pandora was such an all consuming read. I loved how it brought Georgian England together with Greek mythology. The result was a stunning story, with clever characters, ones to really invest in and some to revile.

Pandora ‘Dora’ was the orphaned daughter of two archeologists-excavators-plunderers but they were respected experts and sellers of antiquities prior to their deaths. Dora relied on her uncle Hesakiah who quite frankly was one of the most revolting characters ever, but I loved how well he was written. He was a dodgy dealer in all the ways.

The arrival of the jar brought a creepy atmosphere to the page and the house Dora lived in. She had assistance from Edward with regards to the jar and there were some interesting side characters in Cornelius and Lottie. The Coombes brothers situation made me shudder and I could literally smell some of the things going on, kudos to the description. I have to mention Hermes, Dora’s animal companion in the shape of a magpie. He was fierce, wiley and protective; I enjoyed him on the page.

There’s a small part of me that was uncomfortable reading about the colonial aspects of plundering and acquisition even though that was historically correct. I hate element of British history, our museums are still full of antiquities that are not ‘ours’.

This was a superb debut, easy to read and not overtly historical-heavy. Dora the explorer (look someone had to say it) made for great reading and I’d jump on another release from this author.

Thank you to Vintage Books for the eARC copy.