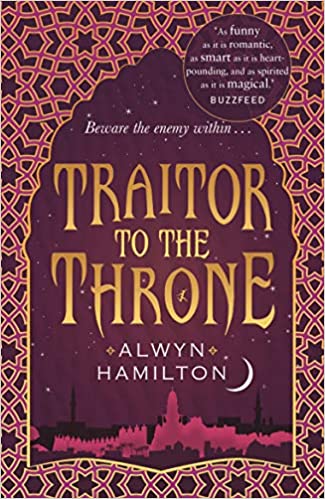 Rebel by chance. Traitor by choice.

Gunslinger Amani al’Hiza fled her dead-end hometown on the back of a mythical horse with the mysterious foreigner Jin, seeking only her own freedom. Now she’s fighting to liberate the entire desert nation of Miraji from a bloodthirsty sultan who slew his own father to capture the throne.

When Amani finds herself thrust into the epicenter of the regime—the Sultan’s palace—she’s determined to bring the tyrant down. Desperate to uncover the Sultan’s secrets by spying on his court, she tries to forget that Jin disappeared just as she was getting closest to him, and that she’s a prisoner of the enemy. But the longer she remains, the more she questions whether the Sultan is really the villain she’s been told he is, and who’s the real traitor to her sun-bleached, magic-filled homeland.

Forget everything you thought you knew about Miraji, about the rebellion, about Djinn and Jin and the Blue-Eyed Bandit. In Traitor to the Throne, the only certainty is that everything will change.

Fittingly for a book with the word ‘traitor’ in the title, I think the subheading should be : trust no one. Because wow, just when you think you know a body..

This book did so many things differently than book one did but what was very apparent is that Rebel of the Sands was just the tip of the iceberg for this world, this story, and there’s really no way to tell how it’s going to end.

Confusingly, we start this book with a bit of a time jump, brushing over events that have happened off page, and then only get some explanation quite a few chapters later. It definitely puts the reader on the back foot for a bit, and I don’t know why, but I guess we had to get to a certain place by a certain time and considering this page count was already significantly higher than book one.. maybe there was little choice in the manner? But it does brace you for the plot to take a turn and the merry little band of rebels we’ve been so used to being around, well.. we lose them for most of this book. It’s just a whole lot of different.

We also, as a result, lost the focus on the romance, which, hey, I mean, they have bigger things to worry about, so it’s realistic, but it’s also because our lovebirds are separated (see aforementioned loss o’rebels); however as a result it didn’t quite solidify my feelings about it. I had actually, conversely, wanted more time spent on it to make it feel more real. I like it but I don’t feel it, y’know?

Everything else though was pretty solid. The action, though lulled for a bit due to Reasons, really kicks off in the last 30%, and in the build up to that we get different sides to characters we had only ever heard about, people from Amani’s past, and all sorts of shifted dynamics. It was very interesting. I won’t say it was always very interesting, this book is long and some bits didn’t hold my attention like others did, but I still had a good time.

Can’t wait to see how this ends.