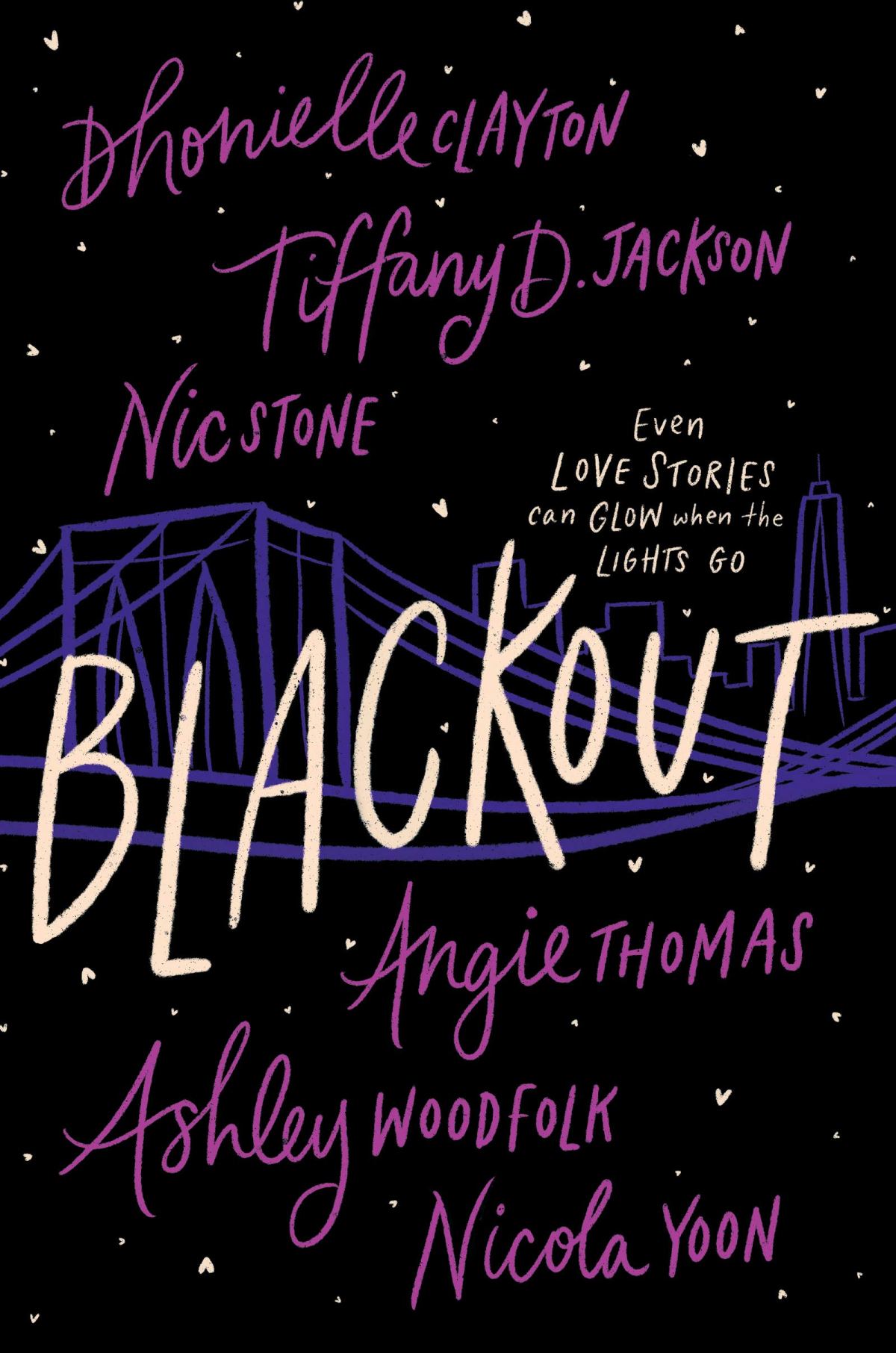 Six critically acclaimed, bestselling, and award-winning authors bring the glowing warmth and electricity of Black teen love to this interlinked novel of charming, hilarious, and heartwarming stories that shine a bright light through the dark.

A summer heatwave blankets New York City in darkness. But as the city is thrown into confusion, a different kind of electricity sparks…

And maybe the beginning of something new.

Beloved authors—Dhonielle Clayton, Tiffany D. Jackson, Nic Stone, Angie Thomas, Ashley Woodfolk, and Nicola Yoon—celebrate the beauty of six couples and the unforgettable magic that can be found on a sweltering starry night in the city.

I’m leaving this unrated and instead rating the stories separately with mini reviews.

Tiffany D Jackson’s story, The Long Walk, is the main driving force of these interconnected stories of Black kids during a city-wide blackout, with four parts that break up the anthology. This story focuses on a couple who have since broken up and both happen to arrive an internship there’s only one spot for. Before it can be resolved, the blackout hits. With nothing else to do, they agree to walk home together and, along the way, hash out their issues. This definitely got a bit overwrought at times, I’m mostly thinking of Act Three, and maybe I’m just used to Jackson’s more mature stories but this felt very.. young, on the childish end of YA, despite the fact that the characters were eighteen. And it’s such a bummer as I’ve loved so many stories from this author. But this one just didn’t do it. Two stars.

Mask Off by Nic Stone : a coming out/coming of age short between two boys who weren’t ever quite friends but were in each other’s orbit throughout the years. Until a queer masquerade party brings them together.. in a way. But it isn’t until they are stuck on the train together when the blackout hits that the masks (not literally!) come off. Honestly, this one was just.. fine. Nothing really remarkable. Two stars.

Made to Fit by Ashley Woodfolk : this short was set in an senior’s living facility, where two girls, one the granddaughter of a resident and the other, who visits the seniors with her therapy dog, meet. When a photo goes missing, the two girls search the home and, as they spend time together, sparks fly. This was a little too insta for me but it tied in with the theme of all the epic love stories being told around them. It was also a tiny bit repetitive RE the granddaughter’s sorta ex but it was cute. Three stars.

All the Great Love Stories.. and Dust by Dhonielle Clayton : hmm, sorta mixed feelings about this one. I love the idea of these two best friends with their history of bets combing through a library to find the greatest book of all time. She’s working up the courage to tell him how she feels and we get pieces of their history together; he’s got a revolving door of girlfriends, she never bothers. Does he feel for her what she feels for him? Again, love the concept, but some of this, despite being a novella, dragged out a bit. The pacing was a little off. But, still, it was cute. Three stars.

No Sleep Till Brooklyn by Angie Thomas : this short features a girl on a tour bus, on a school trip from Mississippi, struggling with feelings for her crush.. when she already has a boyfriend. I’m not going to say much more about this and risk spoiling it, because it didn’t end the way I expected, but the tie-in is that the driver is another character’s father and he may have accidentally gone off-route to drive them towards the block party happening in Brooklyn, where all the other characters we’ve met so far are also planning to attend. Four stars. And, in hindsight, though I loved Yoon’s writing best, this was my favourite story.

Seymour & Grace by Nicola Yoon : easily the best written of the bunch! And I enjoyed the story, too, even if it felt extra short. A girl is trying to find her way to the block party all the characters have made it to where she plans to confront her ex who dumped her because she’d “changed”. She ends up in a Ryde with someone listening to a philosophy podcast and they strike up a conversation; but it’s a rocky meeting. Things go wrong on the way to their destination but, eventually, they get there. And then.. well. Spoilers. I would’ve loved an extra chapter of this, instead of the extended Jackson story, and I’m sad it was so short. It’s a softer story but felt very Yoon-like. Which is a good thing. Four stars.

But while the little throw away tie-ins in Yoon’s story to bring everyone into the story, into the party, was nice, it still boggles my mind we didn’t get a concluding chapter that made it feel, after all this build up, that we were actually at this party?.That’s still confusing. It just kind of ends. Even though the Jackson wasn’t my favourite story, it held the anthology together, working as the glue. So couldn’t we have had a proper ending?

Overall, this wasn’t bad, but I expected to love a lot more from this bind-up than I did. So that’s a bit of a bummer. But I’ve not read anything by Woodfolk or Clayton before, though I’ve definitely had the latter on my radar, and I will definitely be picking up their solo offerings in the future.