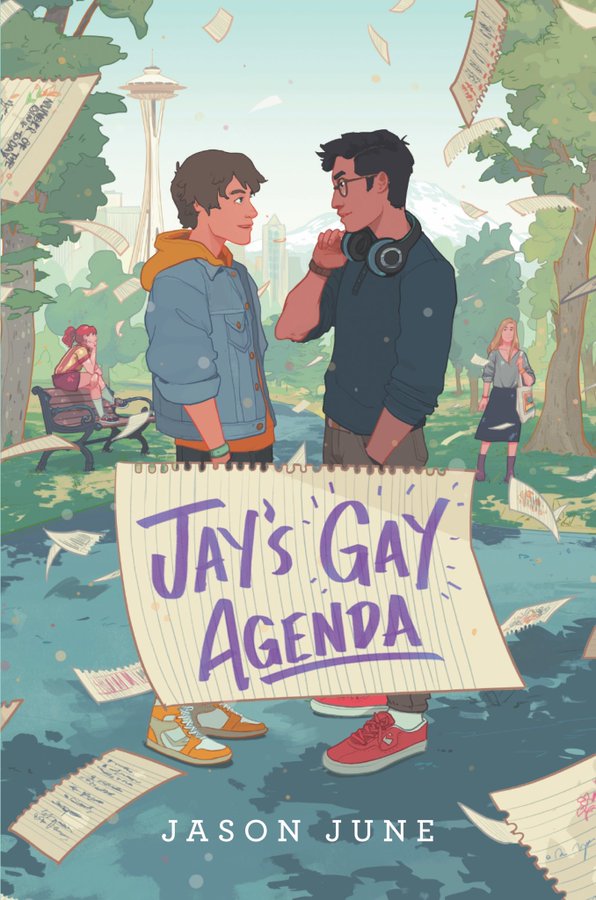 There’s one thing Jay Collier knows for sure—he’s a statistical anomaly as the only out gay kid in his small rural Washington town. While all this friends can’t stop talking about their heterosexual hookups and relationships, Jay can only dream of his own firsts, compiling a romance to-do list of all the things he hopes to one day experience—his Gay Agenda.

Then, against all odds, Jay’s family moves to Seattle and he starts his senior year at a new high school with a thriving LGBTQIA+ community. For the first time ever, Jay feels like he’s found where he truly belongs, where he can flirt with Very Sexy Boys and search for love. But as Jay begins crossing items off his list, he’ll soon be torn between his heart and his hormones, his old friends and his new ones…because after all, life and love don’t always go according to plan.

From debut novelist Jason June comes a moving and hilarious sex-positive story about the complexities of first loves, first hookups, and first heartbreaks—and how to stay true to yourself while embracing what you never saw coming.

So this wasn’t quite the lovely, hilarious, quirky, queer, YA love story I expected it to be. It was, however, very sex positive (though in only one specific way.. more on that later) and I think that should definitely be celebrated. Mostly because it’s the only positive thing I can attribute to this read. Sorry, no, that’s a lie. I liked Jay’s parents. Who were also very sex positive. There we go.

The problem really starts, and ends, with the main character. Not only was he a bit OTT in some ways he was just completely.. well, dick-crazed? To put it nicely, I guess (it would’ve been nice if the focus on virginity hadn’t been so prevalent but also why did no single person address the fact that sex comes in lots of forms, not just penetrative? for a queer novel, this was a very heteronormative view). And he was totally oblivious to literally so much, including his own hypocrisies. I’m not saying he was the only one to be guilty of such, and hey, this is a bunch of eighteen year olds we’re talking about here, but.. still.

I wish I could’ve loved this but I barely liked it. I hope people can enjoy this, because I absolutely think queer readers need messy romcoms they can see themselves in, and there’s definitely a plethora of messy romcoms for those of us who are straight, I just.. I hated the lying, yes, and I hated the cheating, but more than that (and this is big because I really hate cheating) was how easily he was forgiven. By literally everyone. Yes, yes, it’s a YA, we need to wrap up everything nicely, but.. nope. Teens deserve to see consequences play out. We all do. It’s part of life.

Also, COVID/quarantine was mentioned offhand like twice and a) that was really jarring and b) no, stop, I don’t want this in my fiction.

I have no idea if there’s more to come because GR indicates this is the first in a series but I don’t think I’ll be reading on. Especially not if book two is from Jay’s POV.