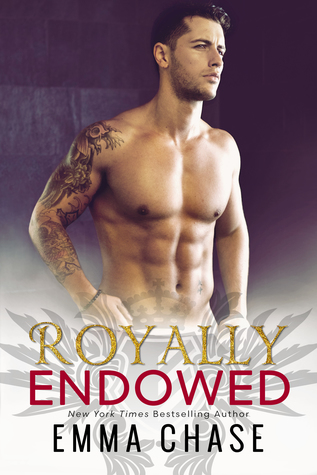 Logan St. James is a smoldering, sexy beast. Sure, he can be a little broody at times—but Ellie Hammond’s willing to overlook that. Because, have you seen him??

And Ellie’s perky enough for both of them.

For years, she’s had a crush on the intense, gorgeous royal security guard—but she doesn’t think he ever saw her, not really.

To Logan, Ellie was just part of the job—a relative of the royal family he’d sworn to protect. Now, at 22 years old and fresh out of college, she’s determined to put aside her X-rated dreams of pat-downs and pillow talk, and find a real life happily ever after.

The Queen of Wessco encourages Ellie to follow in her sister’s footsteps and settle down with a prince of her own. Or a duke, a marquis…a viscount would also do nicely.

But in the pursuit of a fairy tale ending, Ellie learns that the sweetest crushes can be the hardest to let go.
***
Logan St. James grew up on the wrong side of the tracks, in a family on the wrong side of the law. But these days, he covers his tattoos and scars with a respectable suit. He’s handsome, loyal, brave, skilled with his hands and…other body parts.

Any woman would be proud to call him hers.

But there’s only one woman he wants.

For years he’s watched over her, protected her, held her hair back when she was sick, taught her how to throw a punch, and spot a liar.

He dreams of her. Would lay down his life for her.

Everybody knows the bodyguard rules: Never lose focus, never let them out of your sight, and never, ever fall in love

In the moment, after finishing this, I thought it might be my favourite of the series (so far). But after being distracted before I could actually write out my thoughts, and with a little more time to think on it, I’m not going to round up on this one.

While I question some of the bits of this plot, I do have to say, as far as laying groundwork for a long slow-buid, this one definitely did do that, unlike book two. But where I enjoyed the background noise of the plot in book two, this one did follow somewhat typically cliché bodyguard tropes. Which, I mean, nothing wrong with that. But one particular element of said trope was kind of a there-and-gone bit of conflict and in the grand scheme of things had all the lasting power of something.. well, there-and-gone. It either should’ve been a bigger problem, with more fallout, or lifted from the page completely.

My other complaint would be that as much as I liked Ellie, and thought she was fun, Chase kind of did her a disservice by making her painfully horribly stupid at times. Granted, it was done when the character was still young-ish but still.. wow, it hurt. I don’t think I had any real complaints about Logan except, like another mentioned bit of the plot doing little to nothing, inserting his family into the story was also a non-event. I think the author tried to dot too many i’s and cross too many t’s in this one. This is where, in hindsight, it felt a bit messy.

But, again, as it is with most of these, it was a bit of quick sexy low-angst kind of fun and in true end of the series fashion (book four is a prequel, from what I could tell from just the name in the synopsis), it worked as a big come together kind of wrap up, catching us up all the events from as far back as book one background all the way to “present day”, so we got to see all the couples together. And I’m a sucker for an ensemble, so.

I’ll be dipping into the little novella, even though it’s marked 4.5, to get a bit of a HEA timejump from book two’s couple and then I’ll wrap this series with Royally Yours tomorrow and call time on yet another unfinished series. Once again, these won’t be a favourite, but I’m not mad to have spent time with them.