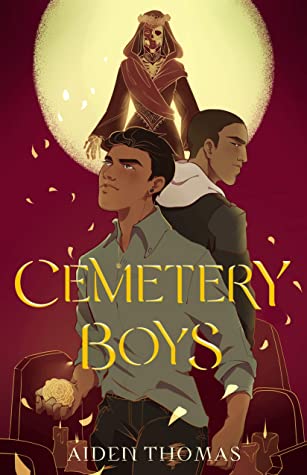 A trans boy determined to prove his gender to his traditional Latinx family summons a ghost who refuses to leave in Aiden Thomas’s paranormal YA debut Cemetery Boys, described by Entertainment Weekly as “groundbreaking.”

Yadriel has summoned a ghost, and now he can’t get rid of him.

When his traditional Latinx family has problems accepting his true gender, Yadriel becomes determined to prove himself a real brujo. With the help of his cousin and best friend Maritza, he performs the ritual himself, and then sets out to find the ghost of his murdered cousin and set it free.

However, the ghost he summons is actually Julian Diaz, the school’s resident bad boy, and Julian is not about to go quietly into death. He’s determined to find out what happened and tie off some loose ends before he leaves. Left with no choice, Yadriel agrees to help Julian, so that they can both get what they want. But the longer Yadriel spends with Julian, the less he wants to let him leave.

Man, I am so bummed right now. I really thought this was going to be a read that lived up to all the extraordinary hype and became a new favourite. But..

Okay, good stuff out of the way? The first half was pretty excellent (more reason for being bummed). The descriptions of both family and culture? So vivid. I could see the colours, I could smell the food, I could hear the overlapping chatter of families. Everything was written with such ease, such flow, that I couldn’t believe this was a debut. There were a few instances of repetition but it seemed to happen as new chapters started, almost like a reset, so.. I kinda forgave it. Also, I was a pretty big fan of Yadriel, our main protagonist, and thought his struggle to make a place for himself in the Brujx culture to be heartwrenching; he refused to give in, to compromise who he was even as every rejection, every time he was misgendered, or dead named, was a stab to his heart. That said, I didn’t love the love interest all the time. He had some extremes I wasn’t down with and while the protagonist didn’t always let him get away with it, it wasn’t fun to live through the tantrums. And some of the exchanges were just.. chaotic.

I would like to note that this isn’t a story with a big shocking mystery. You know who the villain is almost from the beginning. Or at least I did. But it’s fine. Just don’t be surprised if you are expecting a spooky dark mystery. This is actually fairly lighthearteded in the overall vibe.

Where this went hella sideways was the big confrontation. I said things were chaotic at times? Wow, it got worse. Things happened at break-kneck speed and then my eyeballs were being assaulted by capslock and !? exclamations over and over again.. at which point events happen in such a way that a certain character is, like, doing something that amounts to crouching over another and snapping like a dog because they are worried or being protective, or both, and it was just. I had to put the book down because suddenly I didn’t know what I was reading or what was happening. Things just really went off the rails. It was all those moments I disliked about the character from before but magnified to a hellish extreme. Even the bestie of our main protagonist, who up until this point was a solid favourite, was just so.. over dramatic for literally no reason. It went full on soap opera/CW moment and I was just left baffled.

In conclusion. The first half? Very good. The second half? Actually, it’s not even a full half, it’s like.. maybe three chapters? It doesn’t drag out but it really slaps you in the face. Or at least it did for me. So that bit? A lot less good. But we had a sweet ending and there was something that did happen that I didn’t expect, possibly because I’m dumb, and said thing is a good thing. So while this wasn’t an overall win for me there is lots of enjoyment to be had, along with knowing you’re reading an #OwnVoices story with solid representation, and I will absolutely read this author again.