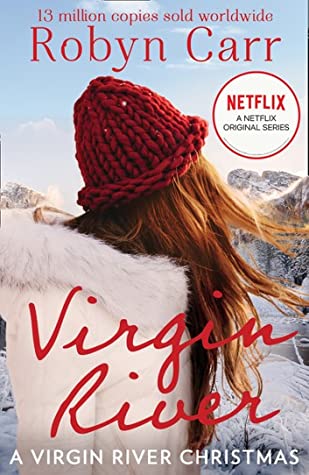 A Christmas Miracle in Virgin River

Last Christmas Marcie Sullivan said a final goodbye to her husband, Bobby. This Christmas she’s come to Virgin River to find the man who saved his life, and gave her three more years with him. Fellow marine Ian Buchanan dragged Bobby to safety in Fallujah four years ago then disappeared. Since then, Marcie’s letters to Ian have gone unanswered.

When Marcie tracks Ian to the tiny mountain town of Virgin River she finds a man haunted by his past and afraid to look to his future. Not easily scared off Marcie pushes her way into Ian’s reclusive life to see beyond his pain to the man he once was. The man he can be again.

Ian doesn’t know what to make of the determined young woman who forces him to look into the painful past and, what’s worse, the uncertain future. But it is, after all, a season of miracles and maybe, just maybe, it’s time to banish the ghosts and open his heart.

I have a happy sigh over here because I am the worst to please when it comes to Christmas stories; they rarely work for me. I knew this one had a chance because I’ve become a fan of this series, both book and TV.

What was fabulous about this Christmas story was that the Virgin River characters were very in the background and the main characters were two new recruits to the series. This story was very focused around marine (combat) experiences which fit with Jack and Preacher’s legacy well.

Marcie was a widow of a marine searching for the best friend and Sargeant of her late husband. Ian was that man but really he was a wild bear of man, nomading in the wilderness, in a very sparse cabin. Their story was just beautiful and their forced proximity was aided by flu, snow, Doc and Mel. Marcie won me over with her determination and big heart.

There was a scene in the book where Marcie recounted her late husband’s death and I had quiet tears just dripping down. This book truly had all the feels. I really hope that these two characters will feature further in the series because I am such a fan.

Thank you to Mills & Boon for the review copy to fit with the season.