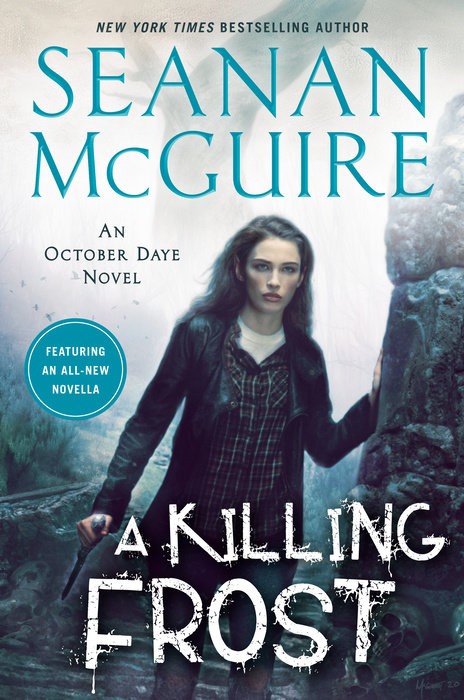 When October is informed that Simon Torquill—legally her father, due to Faerie’s archaic marriage traditions—must be invited to her wedding or risk the ceremony throwing the Kingdom in the Mists into political turmoil, she finds herself setting out on a quest she was not yet prepared to undertake for the sake of her future…. and the man who represents her family’s past.

Guess who’s back.. back again. Hollis is back. Back for punishment!

Okay but in all seriousness.. this might’ve been one of the least frustrating read for this series. That doesn’t make it good but it is an unimportant distinction to make. The caveat? It achieves this honour because despite one or two seemingly major events, nothing really happens. And those one or two big events? Hella underwhelming or anticlimatic. Both, even.

I’m unsure if this was just the calm before a whole new shitstorm but I guess book fifteen (yikes) will determine whether that bodes true or not. As for A Killing Frost? In adding yet another delay to a certain relationship, this had a fairly reasonable reason for doing so, which also helped to close the loop (ahaha honestly not sure why I keep thinking this to be a thing with this series, everything always gets resurrected even when it seems resolved) on something that has lingered throughout so many books. But this time with a twist. The character in question had become sort’ve a favourite of mine, not hard because I like so few of them, but in this one I admit I was disappointed. I felt some reactions felt overblown, or out of character, (and there was someone else who felt the same, so maybe that was just this book’s theme..) or maybe it was just his true nature finally coming through and leaving me to realize I liked him a different way. Regardless. I was sorta into this particular “happy ending” but also not. I’m curious how my buddies, both longtime fans, will take it (spoiler, they haven’t read this yet but somehow I have! what even).

As for the other major thing, well. As usual I have questions. So many questions.

I forever feel sorry for Toby because of how so many characters in this world treat her but equally she is a pain in the ass who likely deserves it. A matyr to the very end she is constantly slipping in moments of “oh is this what it’s like to watch me do x y or z? that sucks” and yet.. she persists. All because she’s a hero of the realm. The excuse wears thin, chickadee! And yet honestly I have no one to blame but myself for still being here.

And yes. I will still read on. Completionist to the bitter end.