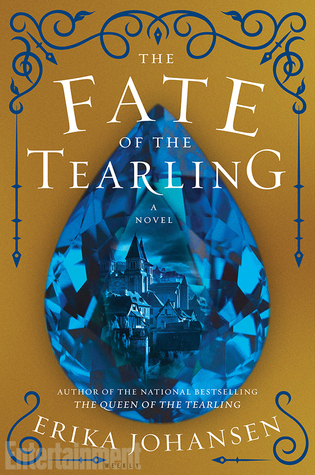 In less than a year, Kelsea Glynn has grown from an awkward teenager into a powerful monarch and a visionary leader.

And as she has come into her own as the Queen of the Tearling, she has transformed her realm. But in her quest to end corruption and restore justice, she has made many enemies – chief among them the evil and feared Red Queen, who ordered the armies of Mortmesne to march against the Tear and crush them.

To protect her people from such a devastating invasion, Kelsea did the unthinkable – naming the Mace, the trusted head of her personal guards, Regent in her place, she surrendered herself and her magical sapphires to her enemy. But the Mace will not rest until he and his men rescue their sovereign from her prison in Mortmesne.

So, the endgame has begun and the fate of Queen Kelsea – and the Tearling itself – will be revealed…

I’m going to preface this by saying that I knew this ending was polarizing because I had so many people reach out with comments ala “can’t wait to find out how you feel about the ending!” that I knew to expect something.. maybe not bad but obviously divisive. Maybe that warning prepared me? Maybe it gave my brain time to expect the worst? The problem, of course, is that I could predict maybe only like 6% of this whole series. So naturally I had a vague kernel of an idea of what might happen but zero ability to predict what it would look like when the dust settled.

And nope, I’m not even going to hint at it! Read it for yourself and find out.

That said, I do think this book might be the weakest of the three. This series definitely took a turn in book two, in the telling of the story, and in the mechanics of this world, making it far more than just a typical fantasy. And in book three we take yet another turn — in hindsight I think my favourite was book two. It did much to fill in those last remaining gaps, gaps we desperately needed filled to understand what brought us to the point we were at, but I found the way that was done was a little less.. magical. It felt a bit more same-y but less sparkly, if that makes sense? But in a way that also fit because suddenly these people, these figures, that had been so revered? They, too, were a little less sparkly. What Johansen did, over and over again, was give her characters depth, and flaws, and, occasionally, but particularly in the case of Kelsea, have them examine their own internal workings and hypocrisies, what they were willing to sacrifice in order to do the right thing. So really I shouldn’t be surprised that she chipped away at those who were placed on the pedestals of this society, too.

In fact I do believe Johansen deserves a lot of credit for just.. not doing the expected. Like, ever. She took strange twisty dark path and then committed to choices that I think most authors wouldn’t have dared; particularly for their first series. I can see why this third book either perplexed of pissed people off. Me? I just loved the ride. It’s bittersweet, yes, and maybe it’s an easier pill for me to swallow knowing there are still two books to come? Probably not direct sequels to this ending but still.. more. Either way, the romantic in me (and I don’t necessarily mean this in a face value way..) might not have loved the ending, not really, but I respect it. I respect the choice and the commitment to seeing things through this way.

This was — and will likely continue to be — a strange series but nonetheless was fascinating, brutal, compelling, and, enthralling. I had a great time. Would I recommend this to anyone? Probably not. I refuse to be responsible for anyone’s experience with this world. Make of that what you will!