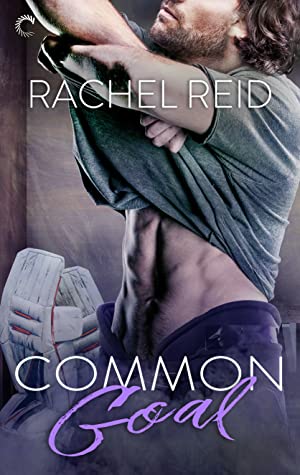 Veteran goaltender Eric Bennett has faced down some of the toughest shooters on the ice, but nothing prepared him for his latest challenge—life after hockey. It’s time to make some big changes, starting with finally dating men for the first time.

Graduate student Kyle Swift moved to New York nursing a broken heart. He’d sworn to find someone his own age to crush on (for once). Until he meets a gorgeous, distinguished silver fox hockey player. Despite their intense physical attraction, Kyle has no intention of getting emotionally involved. He’ll teach Eric a few tricks, have some mutually consensual fun, then walk away.

Eric is more than happy to learn anything Kyle brings to the table. And Kyle never expected their friends-with-benefits arrangement to leave him wanting more. Happily-ever-after might be staring them in the face, but it won’t happen if they’re too stubborn to come clean about their feelings.

Everything they both want is within reach… They just have to be brave enough to grab it.

Do you continue to pick up books in the Game Changers series because you want Ilya cameos? Because hi, it me.

“Ilya Rozanov wants to hang out with you tonight? At a gar bar?“
“Apparently.”
“That guy is so weird.“

Just kidding. I’m also here for the hockey and the romance. And surprising no one, in a series of hockey romances, we had both here.

Dating a much younger man would pretty much make him a walking midlife crisis, and Eric really didn’t want that kind of attention. He couldn’t stomach the idea of being a recently divorced man rebounding with a pretty young thing. And then there was the fact that Kyle was a man.

This was definitely the strongest in this series post, and pre, HEATED RIVALRY, and I’m so relieved about that. The dynamic of this couple, the age gap and the fact that it’s the older man needing guidance as he explores his hitherto unexplored attraction to men, was so sweet without ever getting into book one levels of sucrose. I think what really helped this romance for me was that I believed in the friendship that was the foundation for what later bloomed. And, honestly, the first kiss? Heart eyes. Pure heart eyes. This is actually one of those romances where I was less into the hot and heavy scenes and more into the burgeoning affection between the leads.

“Not that I’m not happy for Scott, but I’ve been thinking about my own wedding, I guess.”
“You can remember back that far?“
“Shut it.”
“I forget. Was Holly a war bride? Was she your nurse after the Germans shot you?“
“All right, I’m going home.“

As I’m forever saying, I’m a sucker for an ensemble, particularly when it’s a sports team ensemble. These players? I adore them. There were so many hilarious little moments and yes, as I teased above, Ilya was at the center of a lot of those funnies. Getting those moments with him, particularly when sharing page time with Hollander, and knowing we’re finally getting a sequel? I’m trying to cram my expectations into a small box but it’s hard, yo.

“Who knew Rozanov had such a big heart?“
“I had a hunch. I think he might secretly be a big softy.”
“He does a damn good job of hiding it.“

Back to COMMON GOAL, I want to mention how awesome it was to see dialogue about consent and expectations about intimacy between two men because even in m/m romances I don’t think that’s really talked about. Safety, protection? Sure. But feeling obligated to put out, or return the favour, especially if you aren’t comfortable or as enthusiastic as you might have been? We love to see that. Also the discourse around the validity of bisexuality even if you haven’t explored part of that spectrum? Fabulous.

Toronto was a team of weirdos. <– this quote isn’t included for any context, it just made me laugh

Overall, I had a really good time with this read and would definitely recommend fans of this series who may (or may not) have been a little less enthusiastic about book three, particularly in the wake of Ilya and Hollander, to give it a go. I was also about to suggest those missing hockey to dive face first into this to get your fix but hockey is, like, back now? But weird? In August? 2020 man, it keeps on keepin’ on.