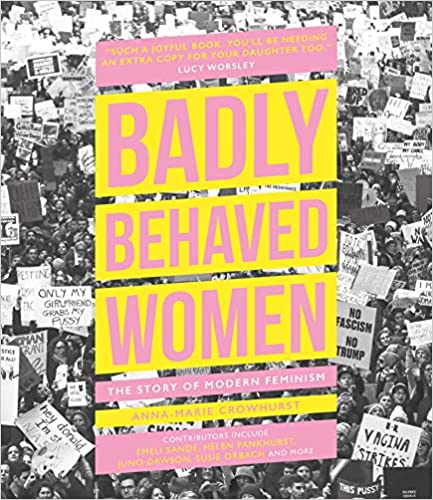 Badly Behaved Women is the illustrated story of the past 100 years of the women’s movement, from suffrage, alleged bra burning and the politics of hair to Beyoncé, body positivity and #MeToo.

In the early twentieth century, through ceaseless dedication and fearless campaigning, the women’s movement achieved what had previously been unimaginable: a woman’s right to vote. Four waves of feminism and a century on, the rich cultural history of this movement is truly worthy of celebration.

Accompanied by stunning photographs, personal testimony essays from key figures and archive material from sources around the world, Anna-Marie Crowhurst’s compelling and entertaining retelling of this multi-stranded, global and ongoing story also examines the flaws of the movement and the future of feminism.

The concept, the size…everything about BADLY BEHAVED WOMEN was stunning. The chapters, the timeline of feminism from 1900s to present time and most of all the powerful pictures supporting the themes were superbly thought out. This book had easy bites for chapters, you could dip in and out as well as read front to back, like I did.

I loved the stroll through history from the early 1900s starting with suffrage for white women , then considering black womens’ experience of this. From the fight to wear trousers to how WWII changed how women were perceived from a usefulness perspective. I found the start of reproductive rights so interesting. Initially, was the right to take the contraceptive pill and having some control over the number of children women had to have (unthinkable at the time that women might not want to have children). I never really thought of this when I started taking the pill, that women had once had to fight to do this. All closely linked to the women’s right to have sex as she chooses.

The book tackles the concepts of equal pay – this is still an issue in my career as is career progression. That said, I’m a white woman, this is so much worse for black women. Women of colour and their experiences were threaded throughout the book but also with some separate chapters as well, featuring some heroes of all our times, such as Angela Davis. Queer womens’ experiences were considered as a discreet chapter but were not particularly threaded through the book.

Not every topic was super serious, there was humour and celebration. Shoulder pads and handbags were featured. We might laugh at the Shoulder pads of the 1980s but they’re were a sign of power, think Grace Jones and Princess Diana.

I really enjoyed reading about the power of the media, such as TV, movies and music. I remember watching some movies when I was young with women as working women, juggling children as though a novelty. Then TV such as Buffy and The X Files where strong women were the centre. All this was alongside the reality of things such as female astronauts in space. I also loved the section on women’s football.

Present times in this book brought us to the #metoo experiences and movement, feminist comedians, and body positivity. The whole read felt like an enlightening and empowering stroll through the collective female journey. I highly recommend this for teens, adults and all genders, it was fantastic.

“Woman are powerful and dangerous.”

Thank you to Welbeck Publishing for the beautiful gifted copy.