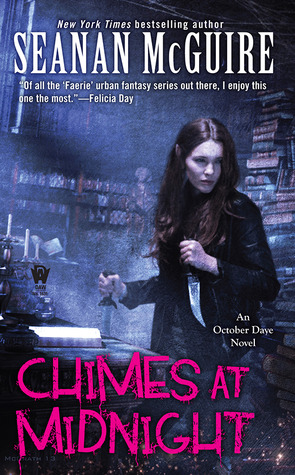 Things are starting to look up for October “Toby” Daye. She’s training her squire, doing her job, and has finally allowed herself to grow closer to the local King of Cats. It seems like her life may finally be settling down…at least until dead changelings start appearing in the alleys of San Francisco, killed by an overdose of goblin fruit.

Toby’s efforts to take the problem to the Queen of the Mists are met with harsh reprisals, leaving her under sentence of exile from her home and everyone she loves. Now Toby must find a way to reverse the Queens decree, get the goblin fruit off the streets–and, oh, yes, save her own life, since more than a few of her problems have once again followed her home. And then there’s the question of the Queen herself, who seems increasingly unlikely to have a valid claim to the throne….

To find the answers, October and her friends will have to travel from the legendary Library of Stars into the hidden depths of the Kingdom of the Mists–and they’ll have to do it fast, because time is running out. In faerie, some fates are worse than death.

October Daye is about to find out what they are.

Plot-wise, this has maybe been the best of the bunch in this series.. so far. In the sense that I am satisfied with the turn things took and the resulting direction we’re now headed in. Does that mean I had a good time, had fun, am excited about this series again? No, nope, and maybe.

The usual suspects (aka the things that annoy me about this series) were very much still present. But with the magnitude and schemery (it’s a word) going on, we had less time to dwell on them or even encourage them. This, in addition to the plot, make for big pluses.

A few new characters have opened up additional pathways into the ‘mystery of October’s heritage’ journey and I’m maybe into it? She’s achieved Super Special Snowflake status a dozen times over and I’m definitely more interested in her mother’s history, and how that ties in with the sea witch (shoutout to my girl!), but you can’t have one without the other, so. I’ll allow it. <– she says, as if she has any choice

I don’t have much more to say, I think this is the shortest of all my reviews, and the least ranty, but maybe that’s a sign. Maybe the tide is turning where we might see some higher ratings soon. Ever hopeful. Ever stubborn. Ever reading this series..