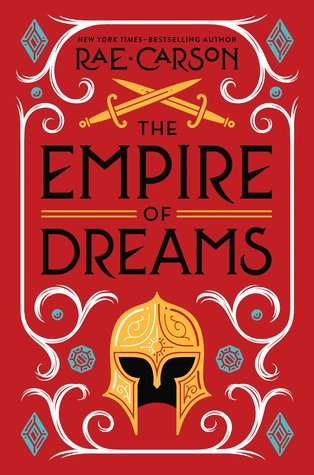 Even though Red Sparkle Stone is a foundling orphan with an odd name and a veiled past, she’s about to be adopted into the royal family—by Empress Elisa herself. Sixteen-year-old Red can hardly believe her luck. Then, in a stunning political masterstroke, the empress’s greatest rival blocks the adoption, and Red is left with no family and no future.

Grieving and lost, but determined to find her place, Red hatches a daring plan: she will prove herself as a recruit for the world’s most elite fighting force, the legendary Royal Guard—something no woman has done before. But it’s no coincidence that someone wanted her to fail as a princess, someone whose shadowy agenda puts everything she loves at risk. As danger closes in, it will be up to Red and her new friends—and maybe some new enemies—to save the empire. If they can survive recruitment year.

Set in The Girl of Fire and Thorns series, this book takes place eight (ish?) years after THE BITTER KINGDOM and focuses not only on Red, a mixed race girl the protagonist from the main series had adopted, but also on the tensions in a world post-major conflict between two warring peoples.

I loved being back in this world, getting small glimpses of the much beloved dynamic between one of my favourite couples, and I did enjoy Red.. mostly. This book flashes between past and present perspectives, we see what Red endured before meeting Elisa, and all the trauma she experienced and now knowingly carries and also unknowingly carries, and how she’s coping. She’s not quite welcome as the Empress’ heir, both because of prejudice and conspiracy, and so she finds a different way to prove herself and also discover her true self — all while also challenging so much of the tradition and stereotyping built into this society.

I’ll admit I wasn’t really interested in the flashback POV chapters. Maybe because it felt a little rehashed (we know some of Red’s life pre-on page meeting but obviously not to quite this extent) but also it kept pulling me away from the more exciting training montages and dialogue in the present day where Red was, like, fighting the patriarchy.

“I’ve never trained a girl before.”
“You’ll find it uncannily similar to training any other person.“

That said, I wasn’t always super into the present day stuff, either. There are some big high stakes moments near the end, a lot of which is built up along the way to that point, but things do come to a head pretty quick, and then its all over. I got the happy feels and excitement and joy at the end, don’t get me wrong, but this story somehow felt both a little dragged out and also over too fast. A standalone in an existing universe where we previously had a trilogy.. I mean, that’s tough. But there is an eclectic mix of new faces amongst the familiar, some good banter, and the one thing you can always depend on from this author is a fabulous ensemble cast.

So, I had almost rounded up because bias and nostalgia (infact, after finishing, I had rated this a four with a “but it’s really a three” caveat but as I drifted off to sleep that night.. I knew I shouldn’t have, so, here I am fixing the situation slightly) but ultimately I think where I’ve put it is true to the story itself. But. I loved being back with these characters, seeing some grown up, grown into their own, and others thrive despite the history and tragedies, not to mention traitor’ing (it’s a word), that predate them. But is it perfect? No. But I don’t think most fans will care and, best of all, I hope it inspires those who haven’t yet read The Girl of Fire and Thorns series to pick it up. Because it’s excellent.