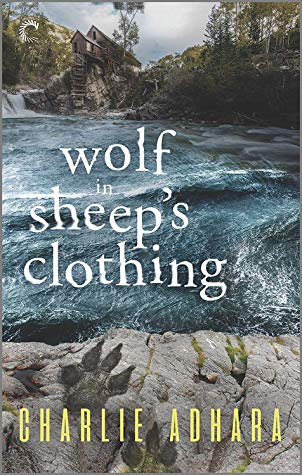 Agent Cooper Dayton and his partner, Oliver Park, are going undercover—at a retreat for couples who need counselling. They do say the best cover story is one that’s close to the truth…

Agent Cooper Dayton is almost relieved to get a phone call from his former boss at the Bureau of Special Investigations. It means a temporary reprieve from tensions created by house hunting with Oliver Park, his partner both in work and in life. Living together in a forever home is exactly what Cooper wants. He’s just not keen on working out the details.

With a former alpha werewolf missing, Cooper and Park are loaned to the BSI to conduct the search at a secluded mountain retreat. The agents will travel to the resort undercover…as a couple in need of counseling.

The resort is picturesque, the grounds are stunning and the staff members are all suspicious as hell.

With a long list of suspects and danger lurking around every cabin, Cooper should be focusing on the case. But he’s always been anxious about the power dynamics in his relationship with Park, and participating in the couples’ activities at the retreat brings it all to the surface. A storm is brewing, though, and Cooper and Park must rush to solve the case before the weather turns. Or before any more guests—or the agents themselves—end up dead.

Ho-ho-how great was this! For reference, I started and finished this on Christmas Eve, so. That’s why this opening line is funny to me right now.. knowing this won’t go live until March.

But back on track!

I am new to this series, having binged the first three back in the summer, but seeing this installment up for request was exciting because a) I wasn’t sure we’d get more and b) the third book was my favourite of the series so I had hoped that momentum, and track record, would continue on the up and up. And this was pretty damn great.

“Frankly, Dayton, I don’t know anyone less concerned with pissing off people and wolves alike.“
“Careful, all this flattery is going straight to my head.”

It’s hard to know what to talk about for a series that’s a few books in but suffice it to say, if you’re a fan, you’ll still be, and if you’re keen to start a m/m werewolf shifter series and this is the first you’re hearing about it? Surprise! Go settle in for a nice binge. This one is much fun.

What the hell about him had Park seen and thought, Oh yes, anxiety-ridden loner with a temper sharper than a serpent’s tongue and a deep-seated fear of change whose longest successful relationship is with an equally judgmental cat? Swoon.

On the emotional/relationship front, this one started to worry me a bit because I thought we had come very far in book three, and some of the issues Cooper was working through felt a little bit two steps back. But. Oh but. There were some great moments to push us even further than we’d gone in book three, and with some very good rationale and reasoning, and a heck of a lot of teasing. In the best way.

“It’s not you, it’s me.“
“Very helpful. How on earth will an evolved couple like us convincingly pretend to need counseling?“

Plus? EeeeEeEeEeEe. <– this was my brain during a certain hug. That’s all I’m saying.

“What do you think? Would Kyle and Andrew venture out and ask directions?“
“I don’t know, are Kyle and Andrew auditioning for victims one and two in a horror movie?“
“Kyle would. Andrew needs to keep the car running and getaway ready. For reasons.“
“I hate Andrew.”
“That’s why we’re here.“

The excuse for this particular adventure, going undercover at a couple’s counseling retreat for werewolves, was genius. Who doesn’t love the ‘pretend relationship’ trope except it’s even juicier when they are in a relationship and get forced to work through some things. Delicious. Also, I liked how Adhara introduced another element for the shifters in such a natural way. It seems to happen in each book, the total opposite of an info dump, and always relevant for the moment, not for a ‘maybe in the future you need to know this’, and it’s so perfect. The worldbuilding is so fabulous and so natural, so subtle.

So, yes, this wasn’t Christmassy at all, I’m reading it three months early, but who even cares. I had so much fun, this was sexy as hell, and also hilarious. Sometimes I wonder which I like better, the humour or the swoons (it’s both, but seriously, so funny). I can’t wait for more because with the ending of this one, this series is definitely not over.