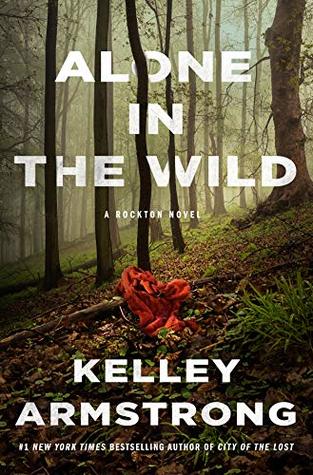 In #1 New York Times bestseller Kelley Armstrong’s latest thriller, the hidden town of Rockton is about to face a challenge none of them saw coming: a baby.

Every season in Rockton seems to bring a new challenge. At least that’s what Detective Casey Duncan has felt since she decided to call this place home. Between all the secretive residents, the sometimes-hostile settlers outside, and the surrounding wilderness, there’s always something to worry about.

While on a much needed camping vacation with her boyfriend, Sheriff Eric Dalton, Casey hears a baby crying in the woods. The sound leads them to a tragic scene: a woman buried under the snow, murdered, a baby still alive in her arms.

A town that doesn’t let anyone in under the age of eighteen, Rockton must take care of its youngest resident yet while solving another murder and finding out where the baby came from – and whether she’s better off where she is.

I’m sad about this “low” rating because I had hoped book four was a fluke and this new book would recapture the magic of the first three installments. This is such a unique premise, with interesting characters, who have plenty of unlikeable and challenging personalities to bounce off of, along with the complicated situation of their living conditions, and it all just makes for fun and exciting and thrilling stories. But these last two..

This series is about an off-the-grid town in the Yukon, called Rockton. Rockton being a town populated by people who have escaped horrors, are on the run from something in their pasts, and have found a place where they can disappear for a few years. Sometimes, too, they are the ones who caused the horrors and just paid enough to a particular group in order to be admitted in order to lay low. Our lead protagonist is Casey Duncan, who arrived to this town to help her friend escape her ex, and has become one of the three detectives who help to police the outlaw-esque locals and keep the peace.

In this particular story, Casey discovers a baby in the woods, along with the body of a dead woman.. and discovers she was not the baby’s mother. It’s through communicating with the two local settlements, plus in speaking with a recluse, and a former hostile (someone who was once part of one of the nomad-esque tribes of.. well, hostile people), to track down who this woman is, where the baby’s parents are, and.. well, lots of that, really. There’s the politics of dealing with the settlements, trade negotiations, and just general complexities in navigating all that plus the wildlife and plus the harsh weather.

What I like about this series continues to be the characters, though some are forever a frustration, and again the setting is just so different. It’s great to read a contemporary where detectives can’t just google shit, there’s no conveniences of the kind we’re used to living with, and it’s a very hard life but not without lots of positive things, too. This particular mystery forced Casey and her Sheriff pseudo-husband to talk about the possibility of children, and the complications therein, and it got a little emotional there at the end. But while I also appreciate that Armstrong uses her cast of characters, most who have never lived within a modern society or any place other than the wilderness, to explore particular discussions, ie, bias, prejudice, toxic masculinity, etc, this one felt really.. preachy. I don’t know. Sometimes people who are too self-aware just get side eye from me.

So, yeah. Not my favourite. But the series itself is still one I enjoy. I do wonder if the particulars of some of what was brought up in this one means there’s an end date coming for the series but who knows. This is the same author who had a thirteen book series, so. Anything goes.

I’ll definitely read on! But this was not a favourite.